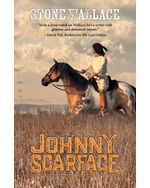 He had hoped that his days as a witness seeker were behind him. But Chance Gamble once more is forced to return to his trade when the cruel actions of a wealthy and ruthless rancher result in a campaign of terror and violence executed by a vengeful, disfigured Comanche who calls himself Johnny Scarface, a formidable adversary who attacks swiftly, cunningly, and without mercy. Tensions arise within the small posse as they ride a treacherous trail and track a killer who may also be stalking them, and who has the panther-like skill to strike suddenly, without warning.