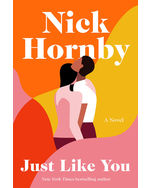 Lucy used to handle her adult romantic life according to the script she’d been handed. She met a guy just like herself: same age, same background, same hopes and dreams; they got married and started a family. Too bad he made her miserable. Now, two decades later, she’s a nearly-divorced, forty-one-year-old schoolteacher with two school-aged sons, and there is no script anymore. So when she meets Joseph, she isn’t exactly looking for love — she’s more in the market for a babysitter. Joseph is twenty-two, living at home with his mother, and working several jobs, including the butcher counter where he and Lucy meet. It’s not a match anyone one could have predicted. He’s of a different class, a different culture, and a different generation. But sometimes it turns out that the person who can make you happiest is the one you least expect, though it can take some maneuvering to see it through.