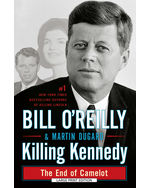 Killing Kennedy: The End of Camelot

A riveting historical narrative of the shocking events surrounding the assassination of John F. Kennedy . . .

The authors of the mega-bestselling page-turning nonfiction book Killing Lincoln now recount in gripping detail the brutal murder of John F. Kennedy — and how a sequence of gunshots on a Dallas afternoon not only killed a beloved president but also sent the nation into the cataclysmic division of the Vietnam War and its culture-changing aftermath. Killing Kennedy chronicles both the heroism and deceit of Camelot‚ bringing history to life.