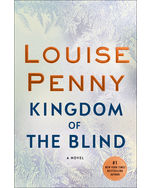 When a peculiar letter arrives inviting Armand Gamache to an abandoned farmhouse, the former head of the Sûreté du Québec discovers that a complete stranger has named him one of the executors of her will. Still on suspension, and frankly curious, Gamache accepts and soon learns that the other two executors are Myrna Landers, the bookseller from Three Pines, and a young builder. None of them had ever met the elderly woman.

The will is so odd and includes bequests that are so wildly unlikely that Gamache and the others suspect the woman must have been delusional. But what if, Gamache begins to ask himself, she was perfectly sane?

When a body is found, the terms of the bizarre will suddenly seem less peculiar and far more menacing. But it isn’t the only menace Gamache is facing. The investigation into what happened six months ago ― the events that led to his suspension ― has dragged on, into the dead of winter. And while most of the opioids he allowed to slip through his hands, in order to bring down the cartels, have been retrieved, there is one devastating exception. Enough narcotic to kill thousands has disappeared into inner city Montreal. With the deadly drug about to hit the streets, Gamache races for answers.

As he uses increasingly audacious, even desperate, measures to retrieve the drug, Armand Gamache begins to see his own blind spots. And the terrible things hiding there.

“Few mystery writers intertwine the personal lives of their characters with the crimes being investigated more skillfully than Penny does, and she is at her best here, as several key players face turning points in their lives, suggesting that if the past can strangle the present, it can also help clear the way for the future.”

“Penny is a master at blending the modern evils affecting the big city and hidden secrets of the almost mythical village of Three Pines. Well-known characters return and new faces add richness to a narrative that will keep readers intrigued until the last page.”

“Insightful, well-plotted . . . Penny offers intriguing commentary on the willful blindness that can keep people from acknowledging the secrets and lies in their own lives. Penny wraps up some continuing story lines and sends recurring characters in surprising directions.”

“Penny reveals a deeper vulnerability in the introspective Gamache . . . The ending is adrenaline-filled. . . . This starts as a small-town mystery and becomes something grander.”