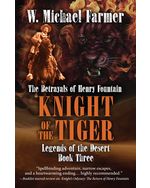 Knight of the Tiger: The Betrayals of Henry Fountain

Legends of the Desert (Book 3)

Pancho Villa was Henry Fountain and Yellow Boy’s friend when they lived in the Sierra Madre. In 1915, after Henry graduates from medical school, Villa asks for help in a brutal civil war for control of Mexico. Six months later, his army destroyed, insane with anger at his betrayal by the United States, he tries to have Henry murdered. Swearing vengeance, Henry begins a long journey into darkness. Based on stories of those who lived the times, Knight of the Tiger portrays a once-great warrior on the edge of insanity, and a young man discovering that betrayal is a double-edged sword.