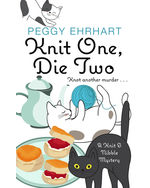 The Knit and Nibble knitting club’s newest member, Caralee Lorimer, is learning to knit for her upcoming role in A Tale of Two Cities. According to the amateur actress, the behind-the-scenes drama at the theater is getting downright catty, and Caralee wants a reckoning for Arborville’s pretentious suburbanites. Just like her character in the play, she is ready to name names. But before she can, Caralee is killed in a suspicious theater accident. Someone thinks they’ve staged a perfect murder, but Pamela Paterson and the Knit and Nibblers are ready to pounce on the killer . . . before it’s curtains for anyone else.