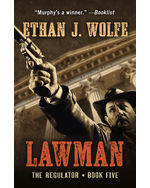 At a university in the Washington area, a man suddenly stands in the middle of Grant’s lecture, pulls a gun, screams “The South shall rise again," and attempts to assassinate Grant. Ever close at hand, Murphy kills the assassin before he can carry out his assassination plot. Shortly thereafter, the real motive for the assassination attempt is revealed when it is learned that the niece of the British Ambassador has been kidnapped and the ransom is a quarter of a million in gold. President Arthur agrees to send for Murphy, and Murphy takes full command of the kidnapping investigation.