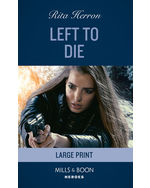 Someone wants her dead. She just can’t remember who.
When she’s discovered by ranger Fletch Maverick as she’s fighting for her life in a blizzard, she has no memory of who she is or how she got there. But according to Fletch’s lawman brother, Jane Doe might be involved in a case that just landed on his desk. As Fletch struggles to figure out who this mystery woman really is, he and Jane first have to survive in the wilderness. But can they also resist the magnetic pull between them before it’s too late?