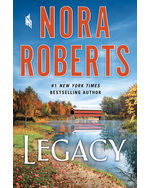 Adrian Rizzo was seven when she met her father for the first time. That was the day he nearly killed her — before her mother, Lina, stepped in. Soon after, Adrian was dropped off at her grandparents’ house. Lina, meanwhile, traveled the country promoting her fitness brand and turning it into a billion-dollar business. A decade later, Adrian has created her own line of yoga and workout videos. While Lina dismisses the death threats that Adrian starts getting as a routine part of her daughter’s celebrity, Adrian finds them unsettling. Then the murders start, and the escalation begins.

“Roberts’ strength has always been her ability to create likable, complex characters, and this crew is even more appealing than most ― they are never whiny in insecurity or snobbish in success; rather, they provide unwavering support for each other’s ups and downs. The most comforting of comfort-food reading ― with a few chills for fun.”

“Roberts knows how to entertain.”