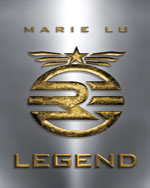 Once the western coast of the United States‚ the Republic is now a nation perpetually at war with its neighbors‚ the Colonies. Born into an elite family‚ fifteen-year-old June is a military prodigy being groomed for success. Born into the slums‚ fifteen-year-old Day is the country’s most wanted criminal. June and Day have no reason to cross paths — until the day June’s brother‚ Metias‚ is murdered‚ and Day becomes the prime suspect.