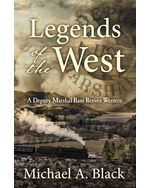 Legends of the West

The Indian Territory, 1879 — Two men are on a collision course. The first is Bass Reeves, who wears a deputy marshal’s star, and has sworn to uphold the law. The other is Marion Michael Donovan, a ruthless killer who murdered his first man at age fourteen. Reeves is in the Indian Territories to investigate a group of white men selling guns to the Indians. Donovan has taken over the town of Temptation and, using a Gatling gun, plans to rob a train carrying a shipment of gold. After discovering that Donovan is responsible for the murder of some Texas Rangers, Reeves finds himself in a race against time to prevent another massacre.