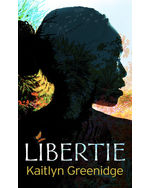 Coming of age as a free-born Black girl in Reconstruction-era Brooklyn, Libertie Sampson was all too aware that her purposeful mother, a practicing physician, had a vision for their future together: Libertie would go to medical school and practice alongside her as she feels stifled by her mother’s choices and is hungry for something else? When a young man from Haiti proposes to Libertie and promises she will be his equal on the island, she accepts, only to discover that she’s still subordinate to him and all men. As she tries to parse what freedom means for a Black woman, Libertie struggles with where she might find it — for herself and for generations to come.

“Few novels have as strong a sense of place as this fascinating blend of magical realism and African American historical fiction . . . Greenidge succeeds beautifully at presenting the complexities of an intense mother-daughter bond . . . Greenidge creates a richly layered tapestry of Black communal life, notably Black female life, and the inevitable contradictions and compromises of 'freedom.'”

“Greenidge (We Love You, Charlie Freeman) delivers another genius work of radical historical fiction . . . This pièce de résistance is so immaculately orchestrated that each character, each setting, and each sentence sings.”

“Stunning . . . This engaging novel immerses readers in a world rich with historical detail that brings to life lesser-known aspects of post–Civil War American history, such as Black women in medicine and the relationship between Haiti and the United States. This will appeal to teenage fans of adult authors like Toni Morrison, Brit Bennett, and Yaa Gyasi.”