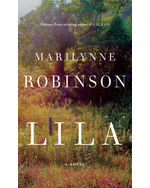 Neglected as a toddler‚ Lila was rescued by a canny young drifter and together they crafted a life on the run. Despite some petty violence and moments of desperation‚ their life was laced with moments of joy and love. When Lila arrives in Gilead‚ she struggles to reconcile the life of her makeshift family and their days of hardship with the gentle Christian worldview of her husband which paradoxically judges those she loves.

"This is a lovely and touching story that grapples with the universal question of how God can allow his children to suffer. Recommended for fans of Robinson as well as those who enjoyed Elizabeth Strout's Olive Kitteridge, another exploration of pain and loneliness set against the backdrop of a small town."

"Robinson has created a tour de force, an unforgettably dynamic odyssey, a passionate and learned moral and spiritual inquiry, a paean to the earth, and a witty and transcendent love story— all within a refulgent and resounding novel so beautifully precise and cadenced it wholly tranfixes and transforms us."

"Robinson carefully crafts this provocative and deeply meaningful spiritual search for the meaning of existence. What brings the couple together is a joyous appreciation of the beauty of the natural world and the possibility of grace."