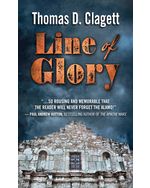 Line of Glory: A Novel of the Alamo

At around 5 o’clock on the afternoon of March 5, 1836, Colonel William Barrett Travis drew a line in the dirt and asked all those who would stay and fight to cross it. Destiny visited many that night. These four were among them. Susannah Dickinson, a woman of surprising gumption. Young James Taylor, who came to the Alamo to free Texas from the tyrannical rule of General Santa Anna. Moses Rose, who refused to cross Travis’s line because he “wasn’t prepared to die.” And Colonel Juan Morales, ordered to assault Crockett and his men at the south palisade, who believed attacking the fort was foolhardy. This is their story.