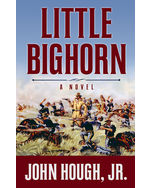 As a favor to the beautiful actress Mary Deschenes, Lt. Colonel George Armstrong Custer hires her eighteen-year-old son Allen Winslow as an aide for his 1876 campaign against the Sioux and Cheyenne. Traveling west against his will, Allen finds himself in the company of Addie Grace Lord, sixteen, sister of one of Custer’s regimental surgeons. The two fall in love, and it is with foreboding that Addie Grace watches Allen and her brother George ride out with Custer’s Seventh Cavalry.