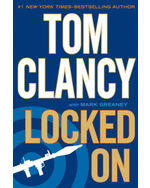 A New York Times bestseller
A Globe and Mail bestseller

Tom Clancy has written fifteen #1 New York Times bestselling novels including The Hunt for Red October‚ Red Storm Rising‚ Patriot Games and The Sum of All Fears. He is known as the master of international intrigue and explosive action.

Tom Clancy’s All-Star lineup is back. Jack Ryan‚ his son Jack Jr.‚ John Clark‚ Ding Chavez and the rest of the Campus team are facing their greatest challenge ever …

Jack Ryan‚ Sr. has made a momentous choice. He’s running for President of the United States again and thus giving up a peaceful retirement to help his country in its darkest hour. But he doesn’t anticipate the treachery of his opponent‚ who uses trumped up charges to attack one of Ryan’s closest comrades‚ John Clark. Now Clark is in a race to stay one step ahead of his adversaries‚ including a shadowy organization tasked to bring him in.