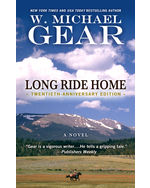 Gunfighter Theo Belk is rootless, ruthless, and deadly — all traits needed to survive on the lawless Western frontier. Haunted by the ghosts of the men he’s killed, Belk sets out to destroy the man who murdered his parents while a younger Theo watched. The gunfighter has become a romanticized American icon, but Gear dares to take us inside the troubled soul of a man teetering between destruction and salvation.