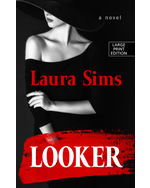 In this taut and thrilling debut, an unraveling woman, childless and recently separated, becomes fixated on her neighbor — the actress. Though they live just a few doors apart, the unnamed narrator can’t help noticing that a chasm of professional success and personal fulfillment lies between them. The actress shares a gleaming brownstone with her handsome husband and three adorable children, while she works a dead-end job and lives in a run-down three-story walk-up with her ex-husband’s cat. And when an interaction between them at the annual block party takes a disastrous turn, what began as a preoccupation spirals quickly, and lethally, into madness.