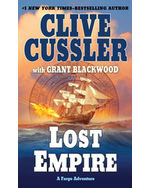 Filled with the dazzling suspense and breathtaking action that are Cussler’s trademarks‚ Lost Empire is a stunning new novel from the grand master of adventure.

While scuba-diving in Tanzania‚ Sam and Remi Fargo come upon a relic belonging to a long-lost Confederate ship. An anomaly about the relic sets them off chasing a mystery &mdahs but unknown to them‚ a much more powerful force is engaged in the same chase. Mexico’s ruling party‚ the ultranationalist Mexica Tenochca‚ is intent on finding that artifact as well‚ because it contains a secret that could destroy the party utterly.