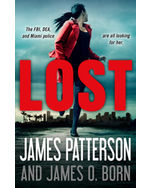 The city of Miami is Detective Tom Moon’s back yard. He’s always kept it local, attending University of Miami on a football scholarship, and, as a Miami PD officer, protecting the city’s most vulnerable.

Moon played offense for U of M, but he’s on the other side of the field this time. And as the Rostoffs zero in on a target dear to Tom, they’re not playing by anyone’s rules.