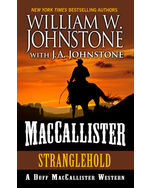 In America, life is full of surprises. Duff MacCallister never expected to hear from Charles McGregor, his battalion commander from the Black Watch Regiment. Turns out he’s the mayor of Antelope Wells, New Mexico, and needs Duff’s help. Power-hungry madman Ebenezer Schofield wants to declare the area an independent principality, with himself as king. He’s already squeezing taxes out of its businesses and citizens, but no one has the guts to stop him. Because Schofield has a private army of fifty men and six cannons — and a traitor working on his side in the heart of Antelope Wells.