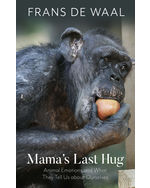 Mama's Last Hug: Animal Emotions and What They Tell Us About Ourselves

Mama, a chimpanzee matriarch, formed a deep bond with biologist Jan van Hooff. When she was dying, van Hooff visited her in her night cage for a last hug. The film of their goodbyes went viral. Millions were deeply moved by the way Mama embraced the professor, welcoming him with a big smile while reassuring him by patting his neck — a gesture often considered typically human yet is common to all primates. This story and others like it form the core of Frans de Waal’s argument that humans are not alone in their capacity for love, hate, fear, shame, guilt, joy, disgust, and empathy.