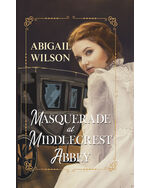 When the widowed Lord Torrington agreed to spy for the crown, he never planned to impersonate a highwayman, let alone rob the wrong carriage. Stranded with an unconscious young woman, he’s forced to propose marriage to protect his identity and his dangerous mission. Trapped not only by her duty to her country but also by her limited options as an unwed mother, Elizabeth Cantrell and her infant son are whisked away to Middlecrest Abbey by none other than the elder brother of her son’s absent father. Elizabeth will need to remain one step ahead of her fragile heart and the relentless fiend bent on her new family’s ruin.

“Wilson weaves a splendid tale of murder and deception in this fun, suspenseful Regency . . . Wilson strikes a nice balance between intrigue and gentle romance . . . This delightful story is sure to entertain.”