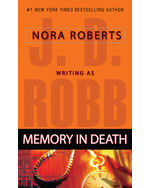 The #1 New York Times bestselling author of Survivor in Death has Lieutenant Eve Dallas walking a tightrope between her professional duties and her private demons.

Eve Dallas is one tough cop. But when Trudy Lombard arrives in town, Eve is thrown into the past, to the days when she was a traumatized girl - trapped in foster care with the twisted woman who now sits in front of her. Though Trudy claims that her visit is friendly, it isn't long before she's demanding money to keep Eve's past a secret. A few days later, Trudy is found dead, and Eve finds that she is not the only one to have suffered at Trudy's hands.

". . . a series that still manages to feel fresh."-- Publishers Weekly