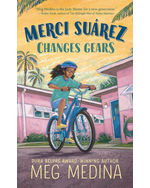 Merci Suarez knew that sixth grade would be different, but she had no idea just how different. For starters, Merci has never been like the other kids at her private school in Florida, because she and her older brother, Roli, are scholarship students. They don’t have a big house or a fancy boat, and they have to do extra community service to make up for their free tuition.

The realistic portrayal of a complex young Latina's life is one many readers will relate to as she discovers that change can be hard, but it's the ride that matters. Pura Belpré–winning author Medina cruises into readers' hearts with this luminous middle grade novel. A winning addition to any library's shelves.

Medina's breathtaking coming-of-age story features a strong, deeply honest protagonist whose insights will make readers laugh, as well as dynamic secondary characters that reveal glimmers of profound depth. Medina capably gets to the heart of middle school experiences in this engrossing story of a kid growing into herself. A must read.

In this warmly told story, Medina (Burn Baby Burn) introduces 11-year-old Merci, descendent of Cuban immigrants, who attends a Florida private school on scholarship with her whip-smart older brother . . . Medina keeps the tone light as Merci's take-charge personality helps her to succeed in this coming-of-age tale about family and the perils of sixth grade.

Medina . . . consistently and assuredly portrays Latinx girls and women who grapple with their insecurities while learning about themselves and their worlds, and middle-grade heroine Merci is a fine example. Accurate and natural use of Spanish words and sayings that fit each character's tone builds authenticity. Medina writes with sincerity and humor to convey the experience of growing up in a close-knit family that tends to mingle too much in each other's business while unfailingly and dedicatedly supporting and helping one another.