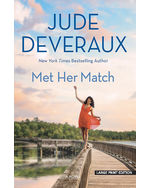 Terri Rayburn is a small-town girl with a reputation she doesn’t deserve. Terri ignores the gossip and focuses on running a summer resort on Lake Kissel. Upon returning home from a trip, she finds a handsome stranger living in her house. She’s convinced someone is trying to fix her up — and, admittedly, Nate Taggert is just her type. Although Nate is engaged and strictly off-limits, he and Terri become unlikely friends. When Nate hears the rumors about Terri, he’s determined to discover the source of the gossip. Terri doesn’t want to revisit the past, but Nate won’t stop until he discovers the truth — even if the truth might be more than either of them can handle.

“Deveraux spins an intriguing and unorthodox romance . . . An entertaining page-turner.”