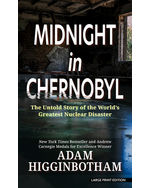 
Midnight in Chernobyl: The Untold Story of the World's Greatest Nuclear Disaster

Early in the morning of April 26, 1986, Reactor Number Four of the Chernobyl Atomic Energy Station exploded, triggering history’s worst nuclear disaster. In the thirty years since then, Chernobyl has become lodged in the collective nightmares of the world. But the real story of the accident, clouded from the beginning by secrecy, propaganda, and misinformation, has long remained in dispute. Midnight in Chernobyl is a harrowing and compelling account of an event that changed history: a story that is more complex, more human, and more terrifying than the Soviet myth.