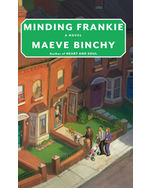 When Noel learns that his terminally ill former flame is pregnant with his child‚ he agrees to take guardianship of the baby girl once she’s born. But as a single father battling demons of his own‚ Noel can’t do it alone.

Fortunately‚ he has a competent‚ caring network of friends‚ family and neighbors: Lisa‚ his unlucky-in-love classmate‚ who moves in with him to help him care for little Frankie around the clock; his American cousin‚ Emily‚ always there with a pep talk; the newly retired Dr. Hat‚ with more time on his hands than he knows what to do with; Dr. Declan and Fiona and their baby son‚ Frankie’s first friend; and many eager babysitters‚ including old friends Signora and Aidan and Frankie’s doting grandparents‚ Josie and Charles.

But not everyone is pleased with the unconventional arrangement‚ especially a nosy social worker‚ Moira‚ who is convinced that Frankie would be better off in a foster home. Now it’s up to Noel to persuade her that everyone in town has something special to offer when it comes to minding Frankie.

“Bestseller Binchy is a national treasure in her homeland of Ireland‚ and her latest novel is a perfect illustration of why. Binchy (Heart and Soul) straddles improbable and possible in her touching saga‚ and if your mind can’t quite wrap itself around St. Jarlath’s Crescent‚ your heart will have no trouble recognizing the landscape.”— Publishers Weekly

“Reading a Maeve Binchy novel is like settling in for a cozy visit with an old friend. In vintage Binchy style‚ a cast of colorfully eccentric characters living in a snug Dublin neighborhood seamlessly weave in and out of each other’s lives‚ united by family‚ faith‚ friendship‚ and community.”— Booklist