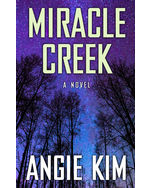 In rural Virginia, Young and Pak Yoo run an experimental medical treatment known as the Miracle Submarine ― a pressurized oxygen chamber that patients enter with the hopes of curing issues like autism or infertility. But when the device explodes, killing two people, a dramatic murder trial upends the Yoos’ small community. Who or what caused the explosion? Was it the mother of one of the patients? Or was it Young and Pak, hoping to cash in on a big insurance payment? The ensuing trial uncovers unimaginable secrets from that night, as well as rivalries and alliances among a group of people driven to extraordinary degrees of desperation and sacrifice.