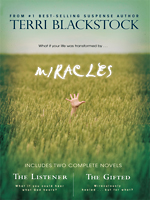 Includes Two Complete Novels: The Listener and The Gifted

In The Listener, Sam Bennett hears voices from people all around him. The waitress in the coffee shop, the elevator operator in Sam's office building, his wife, his secretary, even his pastor. Sam now has insight into people's hearts. He hears their deepest needs just by being near them. But what can one listener do for a world of souls in need of help?

In The Gifted, a massive natural disaster leads to an even more earth-shaking supernatural transformation in the lives of three friends who have no idea why they've been spared or infused with these distinct gifts. One thing is certain: the earthquake was a warm-up for what lies ahead. Terri Blackstock is an award-winning novelist who has written for several major publishers. Published under two pseudonyms, her books have sold over 5 million copies worldwide. Blackstock writes about flawed Christians in crisis and God's provisions for their mistakes and wrong choices. A native of nowhere, since she was raised in the Air Force, Blackstock now makes Mississippi her home.