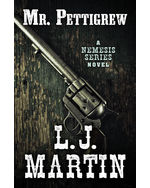 Beau Boone, starving, with only half a left leg, at the end of his rope, falls off the train in the hell-on-wheels town of Nemesis. He’s ready to give up, but Mr. Pettigrew intervenes. Beau owes him, but does he owe him his very life? The Wilkensons, a hard mine owner and his sons, are out to get Mr. Pettigrew. They don’t care how they do it, or who gets in their way. The Wilkensons own the territory — including the lawmen and judges. Can a one-legged man sit shotgun in one of the toughest saloons on the Transcontinental? He can, if he doesn’t have anything to lose.