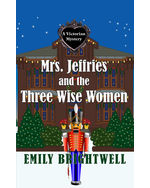 Christopher Gilhaney isn't a popular man, and he proves why once again when he insults every guest at Abigail Chase's Guy Fawkes Night dinner party. When he's shot dead under the cover of fireworks, it's deemed a robbery gone wrong. But when the case hasn't been solved six weeks later, Inspector Witherspoon is called upon to find the killer - and quickly!

Fans of Brightwell's venerable series will be delighted to revisit the clever sleuths as they wade through a plethora of suspects and motives in this pleasant holiday tale.