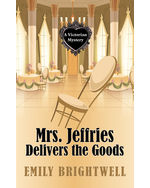 On a cold night in February, the popular Lighterman’s Ball festivities are cut short when a guest of honor, Stephen Bremmer, goes into spasms and abruptly collapses. Once again, Inspector Witherspoon returns to the Wrexley Hotel to investigate a murder. The victim was considered a boorish snob. Despite his Oxford education, he was barely literate, lazy, and prone to making stupid mistakes — his last one being crossing a killer. Now Inspector Witherspoon has his job to do, along with housekeeper Mrs. Jeffries, to catch a murderer who shows no signs of slowing down.