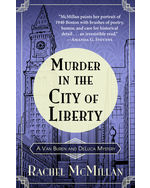 Murder in the City of Liberty

Determined to make a life for herself, Reggie Van Buren said goodbye to fine china and the man her parents expected her to marry and escaped to Boston — never expecting that an unknown talent for sleuthing would develop into a business partnership with the handsome, yet shy, Hamish DeLuca. Now Errol Parker, the leading base stealer in the Boston farm leagues, has hired them to investigate what the Boston police dismiss as harmless pranks. Errol believes they are hate crimes linked to the outbreak of war in Europe, and he’s afraid for his life.