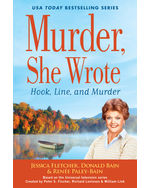 A New York Times Bestselling Author
A USA Today Bestselling Series
Based on the Universal television series
A Murder, She Wrote Mystery

Jessica Fletcher takes a relaxing getaway that turns into a reel deadly situation . . . Jessica enters a fly-fishing competition with the sheriff’s wife, Maureen Metzger. Their guide is ex-con Brian Kinney, who was exonerated after seven years in prison as an accomplice to killer Darryl Jepson. He seems a decent fellow, trying to rebuild his life as a fishing guide. Then Jepson breaks out of prison, the lawyer for both men is found murdered — and now Maureen has gone missing.