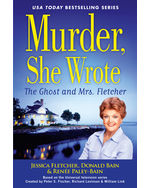 Murder, She Wrote: The Ghost and Mrs. Fletcher

A USA Today Bestselling Author
Based on the Universal television series
A Murder, She Wrote Mystery

Jessica’s friend, real estate agent Eve Simpson, has taken on one of Cabot Cove’s oldest properties — the Spencer Percy House, built in 1805. Current owner Cliff Cooper is convinced he’s about to die. Eve’s got quite a challenge: the house is in deplorable condition, and rumored to be haunted. When Cliff’s deadly premonition becomes a reality, Jessica Fletcher cleans house to catch a killer who hasn’t got a ghost of a chance.