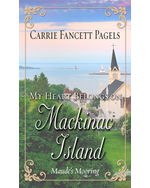 Although the Winds of Mackinac Inn has been in her mother’s family for generations, Maude Welling’s father refuses to let her run it without the guidance of a husband. Seeking to prove her worth and independence, Maude works incognito as a maid at the Grand Hotel. There posing as a wealthy industrialist, journalist Ben Steffans becomes attracted to this intriguing maid.

“Pagels may become one of your favorite authors when you journey to Mackinac Island with her memorable, captivating characters. . . . a beautiful love story with an ending that will sweep you off your feet.”