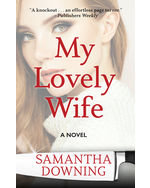 You first saw her at an airport. You spent your last twenty dollars to switch seats and sit next to her on the flight home, but it was worth it when you tentatively made your first joke, and she laughed. You fell in love. You had kids. You moved to the suburbs. You told each other your biggest dreams and your darkest secrets. And then you got bored.

We all have out secrets to keeping a marriage alive. Ours just happens to be getting away with murder.

Dexter meets Mr. & Mrs. Smith in this wildly compulsive debut thriller about a couple whose fifteen-year marriage has finally gotten too interesting . . .