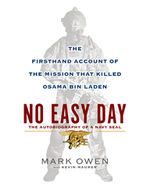 No Easy Day: The Firsthand Account of the Mission That Killed Osama Bin Laden

For the first time anywhere‚ the first-person account of the planning and execution of the Bin Laden raid from a Navy Seal who confronted the terrorist mastermind and witnessed his final moments.

From the streets of Iraq to the rescue of Captain Richard Phillips in the Indian Ocean‚ and from the mountaintops of Afghanistan to the third floor of Osama bin Laden’s compound‚ operator Mark Owen of the U.S. Naval Special Warfare Development Group — commonly known as SEAL Team Six — has been a part of some of the most memorable special operations in history. No Easy Day puts readers alongside Owen and the other handpicked members of the twenty-four-man team as they train for and execute the biggest mission of their lives.