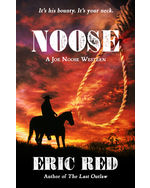 In the cutthroat world of bounty hunters, Joe Noose is as honest as they come. Which isn’t saying much. Just look at his less-than-honest colleagues. They framed Joe for a murder they committed. They made sure Joe’s face wound up on a wanted poster. Now they’re gonna hunt Joe down and collect the reward money. There’s just one problem: Joe Noose thinks it’s his bounty. It’s his reward. And it’s their funeral . . .