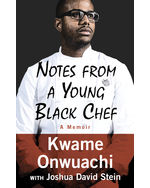 Notes from a Young Black Chef: A Memoir

By the time he was twenty-seven years old, Kwame Onwuachi (winner of the 2019 James Beard Foundation Award for Rising Star Chef of the Year) had opened — and closed — one of the most talked about restaurants in America. He had launched his own catering company with twenty thousand dollars that he made from selling candy on the subway, yet he’d been told he would never make it on television because his cooking wasn’t “Southern” enough. In this inspiring memoir about the intersection of race, fame, and food, he shares the remarkable story of his culinary coming-of-age.