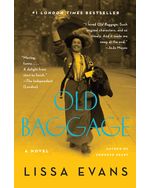 1928. Riffling through a cupboard, Matilda Simpkin comes across a small wooden club she hasn’t seen for over a decade. Memories flood back — of a thrilling past, reminding her of the uneventful present. As a Women’s Suffrage militant, Mattie was jailed five times and always returned to the fray. Running into an old suffragette comrade who has committed herself to Fascism, Mattie realizes there’s a new cause she needs to fight for and a new generation of women. Thus the Amazons are formed, giving girls a place to exercise their bodies and their minds. But when a new girl joins, Mattie’s past crashes into her present, threatening every principle she ever stood for.