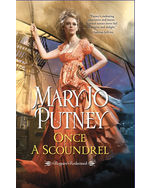 The son of a proud naval dynasty, Gabriel Hawkins was born to command the sea, until he leaves the Royal Navy in disgrace and is disowned by his family. As captain of his own ship, he’s earned his living in ways both legal and illegal, and his experience makes him the best choice to ransom an aristocratic beauty captured by Barbary pirates.

Having avoided the traps of convention and marriage, Lady Aurora Lawrence is horrified by the prospect of spending her life as a harem slave. Her only hope of escape is a quiet, steely captain who has a history with her captor — and who will do anything to free Rory. Together they undertake a dangerous mission through troubled waters — and encounter another kind of danger as attraction burns hot within the close confines of his ship. But even if they endure the perils of the sea and enemy lands, can their love survive a return to England, where the distance between a disgraced captain and an earl’s daughter is wider than the ocean? 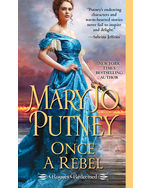