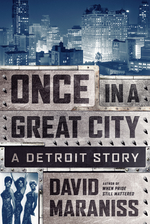 Once in a Great City: A Detroit Story

It’s 1963 and Detroit is on top of the world. The city’s leaders are among the most visionary in America: Henry Ford II; labor leader Walter Reuther; Motown founder Berry Gordy; the Reverend C. L. Franklin and his daughter, Aretha; Governor George Romney; super car salesman Lee Iacocca; Martin Luther King. It was a time full of promise. But in Once in a Great City, David Maraniss shows that the shadows of collapse were evident even then.

"A compelling portrait of one of America's most iconic cities. . . . Maraniss captures Detroit just as it is both thriving and dying, at the peak of its vibrancy and on the verge of its downfall."