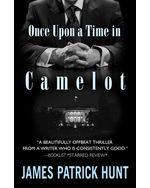 Once Upon a Time in Camelot

America, 1972. It’s the eighth and final year of the administration of President Dan McCormick, the first leader in what promises to be a political family dynasty. His brother, Terry, is poised to become his successor. But things go awry after defense analyst Alan Hirsch goes into hiding, taking a top secret Pentagon report with him — one that could stain the McCormick legacy.

Gripping . . . A beautifully offbeat thriller from a writer who is consistently good.