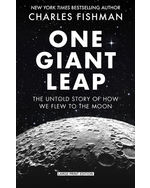 One Giant Leap: The Impossible Mission That Flew Us to the Moon

U.S. President John F. Kennedy astonished the world on May 25, 1961, when he announced to Congress the goal of landing a man on the Moon by 1970. No group was more surprised than the scientists and engineers at NASA: they had less than a decade to invent space travel. There were also ordinary Americans who stepped in to help solve 10,000 problems before astronauts could reach the Moon. One Giant Leap is the captivating story of men and women charged with changing the world as we knew it, which led to arguably the greatest adventure story — and success — of the twentieth century.