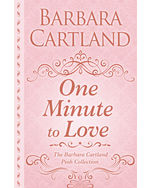 
One Minute to Love

The beautiful Yolisa Warren lives in the country with her father, her mother having died five years ago. Her diplomat uncle, Lord Langford, arrives unexpectedly and says that he would like Yolisa to come with him to Kavalla, a small independent country in the Balkans, where he is to travel on behalf of Queen Victoria and the Prime Minister. Yolisa is thrilled, but on the way her uncle tells her that the visit won’t be what she’s expecting. Because the Russians are determined to infiltrate all over the Balkans, Prince Nikos of Kavalla has begged Queen Victoria to send him a Royal bride from England to safeguard his throne . . .