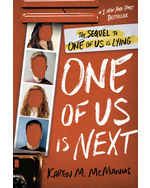 
One of Us Is Next

A #1 New York Times Bestseller An EW Best YA Book of the Year Selection A Buzzfeed Best YA Book of the Year Selection A New York Public Library’s Best Book for Teens Selection A Popcrush Best Young Adult Book of the Year Selection A CBC Teen Choice Book Award Nominee A Bustle Best Young Adult Book of May 2017 A Goodreads Best Young Adult Book of the Year Nominee A YALSA Top Ten Best Fiction Book Nominee A YALSA Quick Pick for Reluctant Young Adult Readers The Sequel to One of Us Is Lying Come on, Bayview, you know you’ve missed this. A ton of copycat gossip apps have popped up since Simon died, but in the year since the Bayview four were cleared of his shocking death, no one’s been able to fill the gossip void quite like he could. The problem is no one has the facts. Until now. This time it’s not an app, though — it’s a game. Truth or Dare. Phoebe’s the first target. If you choose not to play, it’s a truth. And hers is dark. Then comes Maeve and she should know better — always choose the dare. But by the time Knox is about to be tagged, things have gotten dangerous. The dares have become deadly, and if Maeve learned anything from Bronwyn last year, it’s that they can’t count on the police for help. Or protection. Simon’s gone, but someone’s determined to keep his legacy at Bayview High alive. And this time, there’s a whole new set of rules. Age Range: 14 and up | Grade Level: 9 and up | Lexile Measure: HL740L

“An engaging, enticing look at the pressures of high school and the things that cause a person to lose control.”

“This fast-paced blend of Gossip Girl, Pretty Little Liars, and classic John Hughes will leave readers racing to the finish as the try to unravel the mystery on their own.”

“This is no ordinary whodunit . . . surprising and relevant.”

“[As] McManus’s intense mystery unfolds . . . each character becomes more complex and nuanced, adding richness and depth to the suspense.”