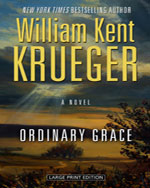 New Bremen‚ Minnesota‚ 1961. It was the Twins’ debut season; the country had a new‚ young president. But for thirteen-year-old Frank Drum it was a grim summer in which death visited often and took many forms. Accident. Nature. Suicide. Murder. Frank was forced to demonstrate a maturity and gumption beyond his years. Forty years later‚ he tells the story of discovering the terrible price of wisdom and the enduring grace of God.

“A respected mystery writer turns his attention to the biggest mystery of all: God… . A novel that transforms narrator and reader alike.”