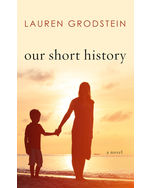 Karen Neulander, a successful New York political consultant and single mother, is fiercely protective of her son, Jacob, now six. His father had made it clear that fatherhood wasn’t in his plans and Karen left, never saying she meant to raise their child alone. Now Jake is asking to meet his dad, and with good reason: Karen is dying.